This tool demonstrates the  journey we have been on with partners who have contributed to the growth of a vibrant media sector and building a transitional stateless media framework in Syria. As the EJSM programme has various elements, this page is a suggested guide on how to navigate the website according to what type of visitor you are: 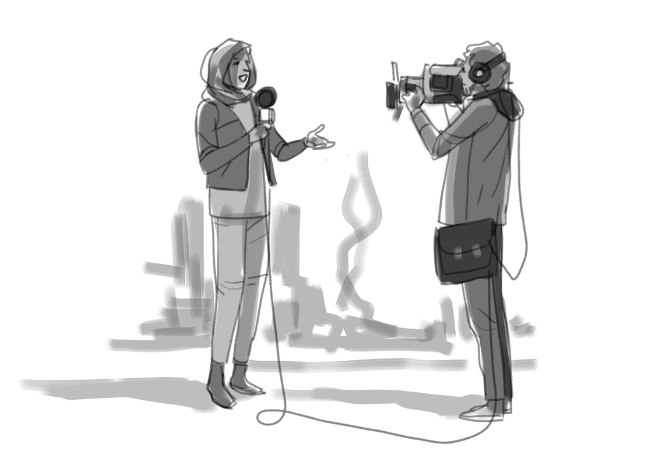 Syria is one of the most repressive countries in the world where media outlets have to operate in a context of conflict and insecurity. Journalists, male and female, play a crucial role in shedding light on what is happening in the country and documenting events and change in these conflict areas. Because the media are often under the influence of interest groups and the state, civilians depend on independent journalists for reliable information. It is essential that they can do their job professionally, but they lack the means to develop their skills and build networks to learn from each other.

The most relevant element in the EJSM programme is the learning programme, which provides aspiring journalists with the capacity to develop and learn from each other. It facilitates learning materials for individual development, and peer to peer learning where journalists can inspire each other and share knowledge (see Learning page) In this way, they can collectively influence the media sector, which can then develop sustainably as a whole.

In addition, research is fundamental for journalists. Why?

Without security, male and female journalists in conflict areas cannot do their job or do it well, leaving the audience bereft of reliable news. Without a safe working environment and without knowing the risks, journalists are subject to threatening situations. The EJSM programme provides extensive manuals, guidelines and  psychosocial support so that journalists can do their job safely, both  digitally and physically (see Security page). The learning program is tailored to fit specific gender sensitive threats and mitigations.

Sadly the list of issues is lengthy, to name a few – censorship, self-censorship, security threats, legal and/or physical punishment and open attacks on the ground-reporters and/or harassment online.

Showcases of selected materials for journalists working in conflict areas: 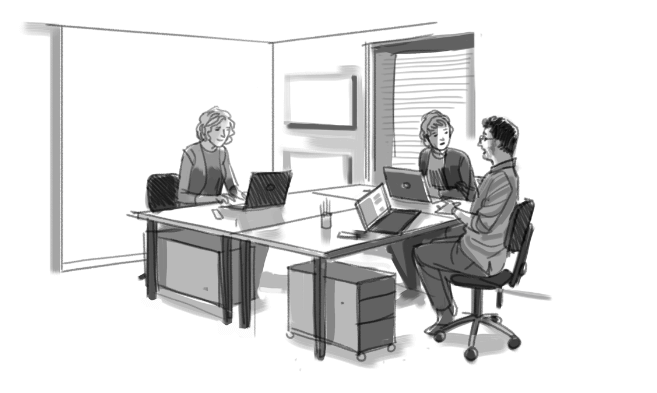 The potential ‘mending’ role that the media plays  in the conflict transformation of Syria and its people, and in the future of Syria more widely beyond conflict, is huge. Do donors and supporters wish the media to play that role?

As a donor organisation, supporters as well as advisers of drafting policies that propose betterment of ‘societies’ and ‘increase sustainability of efforts’ it is important to recognise that sustainable commercial income streams, including advertising and sponsorship, are currently not feasible in the context that Syrian media is operating. Next to and despite individual initiatives to diversify revenue streams, philanthropic support to sustain outlets and supporting institutions remains imperative.

Now more than ever, the media sector, that includes many male and female media practitioners,  deserves the support of donors for the valuable contribution it makes to all Syrians in terms of reliable information, enrichment of the public sphere, inclusion and triggering social change.

Those sponsors that acknowledge the potential role of the media in the long-term resolution of the Syrian conflict see return on this vision investment. While there have been many achievements in the growth of professionalism, this project also showcases the critical need to continue supporting Syria and the changemakers within: male and female media practitioners . The supported media see the donor resources giving them strategic capacity and leeway for protecting the existence of independent media serving Syrians with reliable, balanced information.

More opportunities exist. The media can attain more cohesion when journalists inside Syria and in exile reach out and cover news in all parts of the country. Likewise the media is attaining also more inclusivity adopting a gender justice approach when producing content that covers all parts of the country (participation, visibility, leadership, role models and expert sources).

What matters to sponsors is that a fair development of Syria takes place, that they contribute to the long-term creation of a country with better governance structures, more tolerance among the different groups, whether it concerns women, men, youth or elderly, social, cultural, class, ethnic or religious communities.

It is crucial that all these plans and intentions fall back on a  very coherent approach among donors, not just development actors in the media sector, and more widely in the international development community.

Interesting links to information for (potential) donors:
About Dialogue
About Gender
About Security 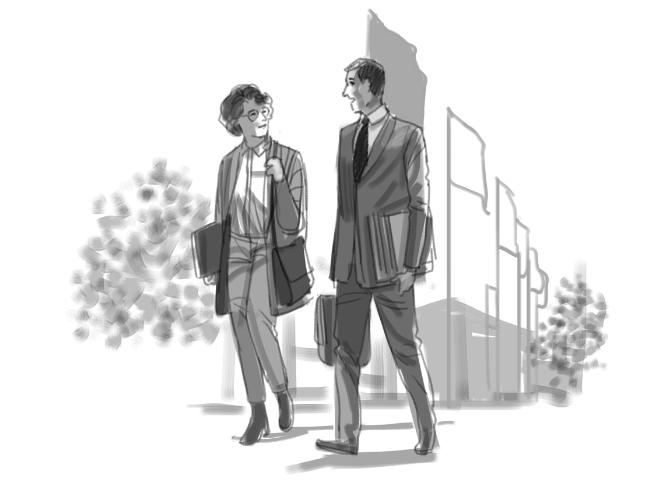 A programme like EJSM that advocates for freedom of expression and support for the independent and human rights based Syrian media sector stimulates discussion on a local, regional, and international level; that is where change can find commitment. The lessons learned from the programme and discussions taking place must be shared with a wide and diverse range of journalists to provide recommendations, inspiration for change and consensus building in the sector. The relationship between dialogue activities and advocacy has been an important aspect of translating the discussion into practical solutions, engaging others and promoting calls for change.

In addition, research, like for example the audience research, produced important evidence that the Syrian people want independent and reliable news. The research confirms the need for a strong, independent media sector and the reason why of such a need. The policy briefs and research should be used further as evidence to advocate for cohesion and peaceful Syria. 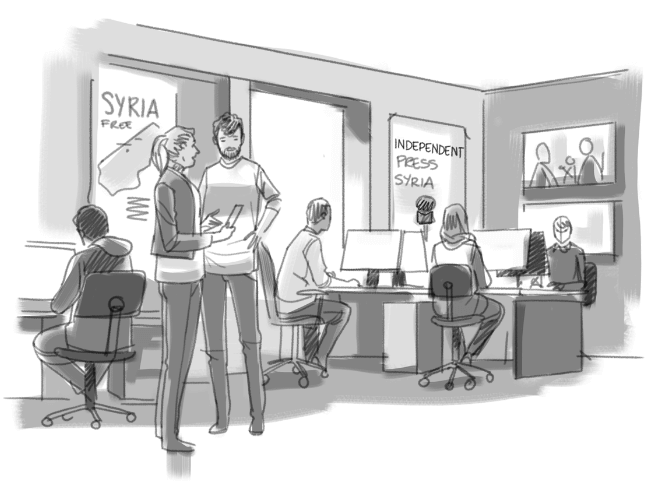 The remarkable journey of the EJSM programme covers a period of five years that has brought successes, exposed challenges and gathered lessons learned for the Syrian media sector. The programme’s experiences are highly relevant for other media development organisations working in similar contexts and when they acknowledge the value of independent media in building free, democratic and fair society. Free Press Unlimited is open to sharing its experiences with anyone interested and is open to meaningful partnership to maximise impact.

From a capacity building perspective, it is important to tailor individual and organizational learning approaches and to be close at each evolving scenario to the actors’ realities on the ground. Use research to gain insight into how we structured our learning programme and how we integrated a holistic and peer learning approach.

The team of experts in the programme deserves all credit for their unceasing efforts in training and coaching media organisations. The transfer of their knowledge and guidance led to the institutionalisation and professionalisation within the media organisations according to policies, democratic procedures and ethical guidelines. The learning development programme relied and was guided by objective research and sharp analysis of the media products. It provided the media organisations with research results with which they could critically analyse themselves in order to make improvements in or consolidate their editorial line.

Interesting links to information for media development agencies:
About Learning
About Research
About Institutionalisation 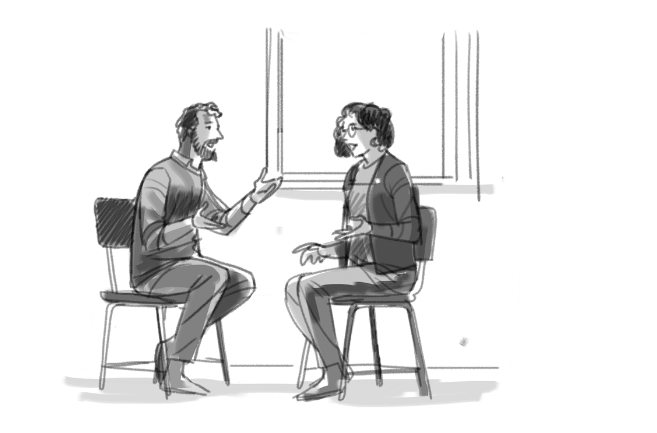 In a context of a repressive and conflict/peace environment, media development efforts help and facilitate the process of producing conflict related news and information that offer a fair representation of the unfolding events. How to keep balance and fairness while female and male journalists are (direct and/or indirect) victims of the violence? How can journalists not take personal, ideological and/or professional sides?

‘How to investigate who is responsible for the bombing of your own neighbourhood, your rhouse, your family and be fair to all sides involved?’

Journalism ethics and professional standards are the right tools to use but what also really helps is an open inclusive dialogue. In order to formulate a personal rigour and  professional editorial line that aspires to balance, discussions that engage (as much as possible) all different points of view are the most effective way to adopt a balanced editorial line. Fighting parties’ embedded media, political party/groups media, peers’ provocations but also community pressure are a big test for media practitioners. Dialogue helps to develop the right personal and professional rigour to obey professional standards. Inter media inclusive dialogue reflects eventually in a balanced choice of topics, stories and sources that tell the stories. At the same time an inclusive media dialogue bridges between reporting facts based events and the context within which these events take place, helps to build understanding and acknowledgement of the causes of the events but also of the actors’ reactions and/or intentions. At its best a ‘dialoguing’ media helps mobilise the social, economic and political options that exist to cope in such contexts. The dialogue programme has been an ongoing element of the EJSM programme and its integration into the policies of media organisations and the work of journalists.

With no surprise, the effects of dialogue especially in ‘an open conflict’ are challenging to measure and its implementation, due to extreme sensitivities to respect, is highly non-linear. The dialogue manual produced by the EJSM team provides the sector with insights and understanding of dialogue approaches specifically for Syrian media and CSOs actors and encourages organisations to use it effectively.

Safety and security sensitivity are a fundamental element in conducting a dialogue. Dialogue facilitators and journalists are aware of this and it is noticeable that safety manuals are applied.

Inclusion and diversity are the pillars of successful dialogue in divided, polarising contexts. Participants draw inspiration for their dialogues among others, from dialogue-gender core groups to make each voice heard and to determine how best to approach dialogue on different issues.

The importance of initiating and sustaining inclusive dialogue for Syria is widely recognised.

The EJSM ethical program under the Dialogue umbrella has managed to move from a learning and institutionalisation programme into a bottom-up media peace programme.

Dialogue and peace-building through media is essential for transformation and for building cohesion. For more hands on information you can visit the dialogue page for the handbook on dialogue and the few policy papers produced as a result of the forums.

Interesting links to information for dialogue experts:
About Dialogue
About Gender
About Security 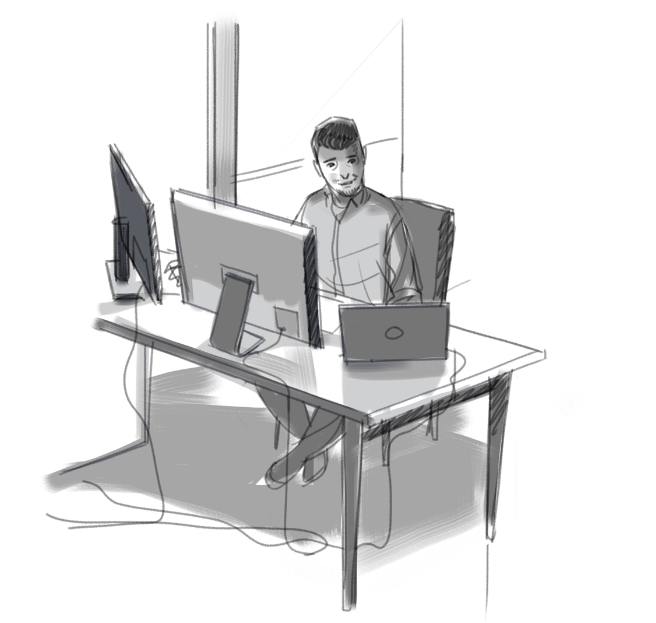 Researchers who are keen to look more deeply into the context of highly complex and dangerous media and conflict/peace contexts and/or specifically into the Syrian media will find many elements relevant. Firstly, with the research methodologies that were applied during the programme, other researchers can make use of the methodology templates that have been designed for media content monitoring. The audience research conducted every year also gives insights for researchers who are inspired to learn more about the divided Syrian audiences, and even offers opportunities to investigate further or fill gaps. The programme has laid a good foundation for the position of research in policy development for Syrian media.